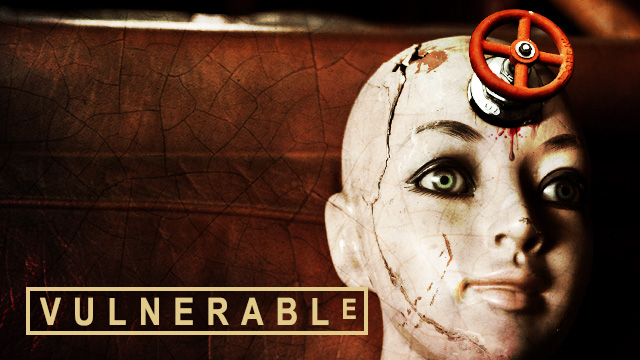 Account theft is a common and longstanding problem for all kinds of online gaming services, as I can personally attest after losing all of my Diablo III loot to a hacker a few years ago. But Valve says the problem is reaching epidemic proportions on Steam, with "around 77,000 accounts hijacked and pillaged each month." Since the service launched item-trading features back in 2011, Valve says the problem of account theft "has increased twenty-fold as the number one complaint from our users... What used to be a handful of hackers is now a highly effective, organized network, in the business of stealing and selling items."

It's not hard to see why the problem is increasing. Items in games like Team Fortress 2 and Counter-Strike: GO can be worth a lot of real money on the secondary market, not to mention the inexplicably popular virtual trading cards floating around the Steam social network. As Valve puts it "practically every active Steam account is now involved in the economy, via items or trading cards, with enough value to be worth a hacker's time. Essentially all Steam accounts are now targets." Goods transferred from stolen accounts can be relatively easy to unload on unsuspecting legitimate customers, too, making it hard to unwind the theft once it's detected.

Now, Valve is taking additional steps to decrease the value of these hacks when they happen. By default, traded items will now be "held" by Valve for "up to three days"—hopefully enough time to give users a chance to discover that their account has been compromised (and to prevent quick item transfer/liquidation by the hackers). Users that have two-factor authentication enabled will be exempt from this restriction, since their accounts are theoretically safe from most hacking attempts. Trades between users that have been friends for a year or more will only be held for "up to one day" even without two-factor, since that implies a real relationship between the traders.

Electronic “tattoos” and pills that turn your body into an authenticator are two next-steps in password protection that Motorola is working on, as described at a session Wednesday at AllThingsD’s D11 conference. Regina Dugan, senior vice president of the Advanced Technology and Projects group at Motorola Mobility, showed off two “wearable computing” oriented methods that remove the security tokens from the two-factor equation.

The electronic tattoos described must strike a balance between the “mechanical mismatch” of hard, rigid machines and soft, pliable humans, Dugan said. The “tattoo” Dugan wore, which appeared to be more like a sticker on her left wrist, uses “islands of high-performance silicon connected by accordion-like structures” that allow the tattoo to flex and move with her skin to stay on and remain functional. Presumably, the silicon and wires would eventually be embedded into the skin to make the user a proper bionic human.

The pill, on the other hand, turns one’s entire body into an authenticator. Dugan described the pill as a vitamin “reverse potato battery” that uses stomach acid as the electrolyte to power a switch. As the switch pulses on and off, it “creates an 18-bit EKG-like symbol in your body, and your body becomes the authenticator,” Dugan said.

If you think your pictures, contacts, and other data are protected by the two-step verification protection Apple added to its iCloud service in March, think again. According to security researchers in Moscow, the measure helps prevent fraudulent purchases made with your Apple ID but does nothing to augment the security of files you store.

To be clear, iCloud data is still secure so long as the password locking it down is strong and remains secret. But in the event that your account credentials are compromised—which is precisely the eventuality Apple's two-factor verification is intended to protect against—there's nothing stopping an adversary from accessing data stored in your iCloud account. Researchers at ElcomSoft—a developer of sophisticated software for cracking passwords—made this assessment in a blog post published Thursday.

"In its current implementation, Apple’s two-factor authentication does not prevent anyone from restoring an iOS backup onto a new (not trusted) device," ElcomSoft CEO Vladimir Katalov wrote. "In addition, and this is much more of an issue, Apple’s implementation does not apply to iCloud backups, allowing anyone and everyone knowing the user’s Apple ID and password to download and access information stored in the iCloud. This is easy to verify; simply log in to your iCloud account, and you’ll have full information to everything stored there without being requested any additional logon information."

Apple has finally responded to increasing online security threats by introducing two-step authentication for iCloud. Like Google and other companies that already employ two-step authentication, Apple's system would provide an extra layer of security on top of the existing iCloud passwords when users try to access their accounts from unrecognized devices. iCloud users can set up two-step authentication on Apple IDs today by going to the Apple ID website and clicking the "Password and Security" tab. 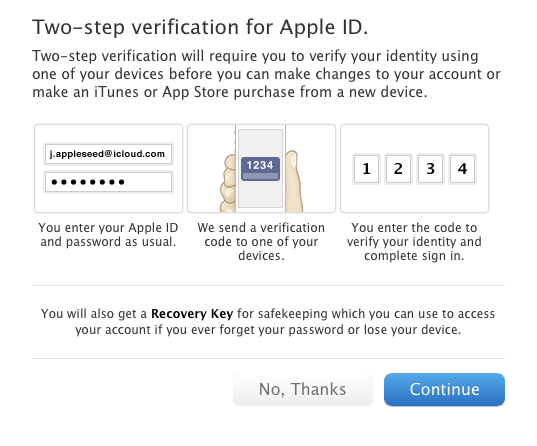 Apple walks you through the process on its Apple ID management site.

For Apple, this means an authentication code is either sent via SMS to a phone number or found within the Find My iPhone app (if you have it installed) whenever you try to log in from somewhere new. This means that a potential attacker will have a harder time getting into your iCloud account without having physical access to your "trusted" device receiving the code. (Users are prompted to set up at least one trusted device when they turn on two-step authentication, though you can have more than one if you like.) Currently, two-step authentication is available to iCloud users in the US, UK, Australia, Ireland, and New Zealand.

One of the benefits to setting this up on your iCloud account is that you'll no longer have to rely on security questions—which are inherently insecure—in order to gain access to your account if you lose your password. The downside (if you consider it that) is that once you set up two-step authentication, Apple will no longer be able to reset your password for you should you lose or forget it. This is what ended up biting Wired editor Mat Honan in the behind when his various accounts were compromised—hackers were able to gather enough personal information from Honan's e-mail and Amazon accounts to trick Apple support into resetting his iCloud password, giving them free reign to remotely wipe his iPhone, iPad, and MacBook.