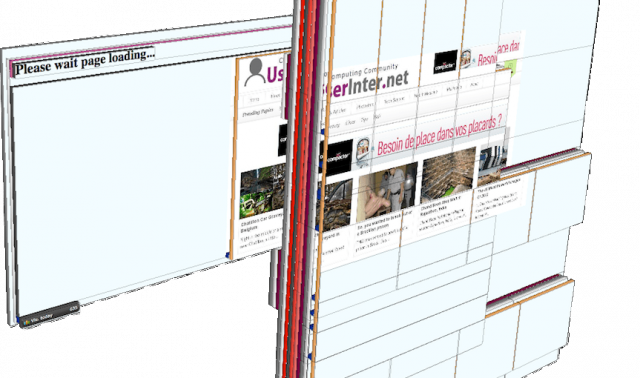 A 3-D representation of a webpage used to deliver "invisible" display ads, with stacked ad spaces that visitors never see. Pages like these get stuffed into small ad slots in legitimate websites through ad networks.
Spider.io

There's more than one way to fleece people using Web advertising. Botnets have been harnessed to generate fake clicks by injecting fake links into search results and to click randomly on webpages the infected computer's user never sees. But fraudsters are starting to get more sophisticated in their efforts to get rich off Web advertising.

As Dr. Douglas de Jager, CEO of Spider.io, reported in a blog post today, fraudulent advertising networks are now acting as middlemen between advertising networks placing Web display ads and those stuffing whole hidden webpages of ads into ad slots on legitimate sites. Instead of using bots, this sort of ad fraud uses real humans to generate the traffic—but it never actually shows them the ads that are served up to them.

Display advertising fraud targets ads that are paid for by pageview rather than by click. The use of real-time bidding to auction ad space on websites through exchanges such as Google's DoubleClick Ad Exchange and Microsoft's AdECN has made it possible for fraudulent ad traders to purchase an ad slot through one exchange and then sell it multiple times across others. They "fulfill" all those ads by putting them onto a webpage that gets served up within an ad slot on a legitimate site—with most of its ads hidden from view.